What Is A Chop Block In Football? A Comprehensive Guide

Football is one of the most dangerous and risky sports today. It’s full of rough bumping, blocking, or snatching.

Chop blocking is the best example of such sweeping and aggressive gameplay. The NFL even had to ban this play to limit player injury rates.

So, what is a chop block in football? In this article, Scott Fujita will walk you through it in detail. What Is A Chop Block In Football?

Chop blocks are one of the blocking tactics in American football in which a defensive player will be blocked by two attacking players.

Football teams have used chop blocking as an effective method to open holes in the line of scrimmage. Thanks to this, the ball carrier can easily find space and run through.

This dangerous tactic has been banned from every tournament, from the NFL to the NCAA, because of the high risk of injury. Basically, there are three common types of chop blocks:

The high-low block is the most common block in the sport. Its name comes from the fact that there are two attacking players blocking the opponent, one in a high position and one in a low position.

Usually, the position of the attacking player is the lineman. The strategy will be for one player to block the defender above the waist and the other to be responsible for the area below the waist.

This type of block has a very high success rate because the defender is almost unable to move. However, it also carries a major risk of injury to that player’s knee and ankle.

The reason is that this position makes defenders have to flex their legs or rotate their ankles clumsy and has many chances of severe injuries. So it became illegal a long time ago.

Another version of the chop blocking affects the flow of the game. This tactic remained valid in the NFL until 2016.

Basically, this variation has the same beginnings as the high-low style. Two attacking players in a line-up will be accompanied by a defensive player.

They will split and block defenders above and below the waist. This way of playing is legal with the NFL as long as “the tempo of the game is towards the block.”

However, the board ultimately decided to ban this version in 2016 because it could still cause injury to the defender’s body.

Outside The Tackle Box

The final version is the one that takes place outside the tackle box. Like the two versions above, this way of playing has been illegal for a long time.

A common place to start this version of chop blocking is wide receivers. In it, they will move outside to the sideline or inside the line.

The wide receiver will then surprise the defending player by blocking a shot in the blind area. As a result, the ball carrier will have a large hole to run through.

Another illegal version of this block is the crackback block. Players will have to use their shoulders to block in both versions but will target different locations.

Usually, the chop blocking will target areas from the waist down. It is dangerous because it can cause the defender’s body to curve abnormally.

Conversely, a crackback block will target the shoulder of the outside linebacker or defensive end.

When the referee detects a chop block, he will signal by dropping his arms outside his body. The palm will face upwards and point forward.

The umpire will then perform a chop of their thighs. That sign indicates that the attacker has committed a foul.

Why Are Chop Blocks Illegal In Football?

At any level of football, all versions of chop blocks are illegal. The main reason is that this style of play is too dangerous and easily causes injuries to blocked players.

The most serious injuries associated with chop blocks are ankle and knee injuries such as ACL and MCL tears.

This serious injury will likely require surgery and render the victim unable to function for several months, or longer.

Most versions of chop blocks became illegal in the NFL in 2016. Before the rule changed, there were certain situations where it was still acceptable.

The Orthopedic Journal of Sports Medicine published a study that statistically compared the number of knee injuries experienced by defenders before and after the rule change.

Research results are quite clear when the number of injuries decreased after the NFL banned chop blocks from playing.

What Is The Penalty For Chop Blocks?

When the referee detects a chop block, the offending team will incur a 15-yard penalty kick. They will have to move more than 15 yards from their goal line.

If the defender’s error is less than 15 yards, the penalty will be different. Depending on the tournament, there will be two scenarios.

The NFL rulebook stipulates that the severity of a chop block will be much higher than a minor defensive error. If it is not too significant, the referee will ignore the defensive error, and the attacker will still receive a 15-yard penalty.

However, in other leagues like the CFL, the two penalties will offset each other. The remaining yards will count towards the attacking side.

It means that if the defending side commits only one 5-yard foul then the two penalties will offset each other. As such, the attacker will incur a 10-yard penalty.

In some cases when players have blocking movements but do not intentionally make contact with the defender it will not count as a foul. The referee will make the final decision at this time. 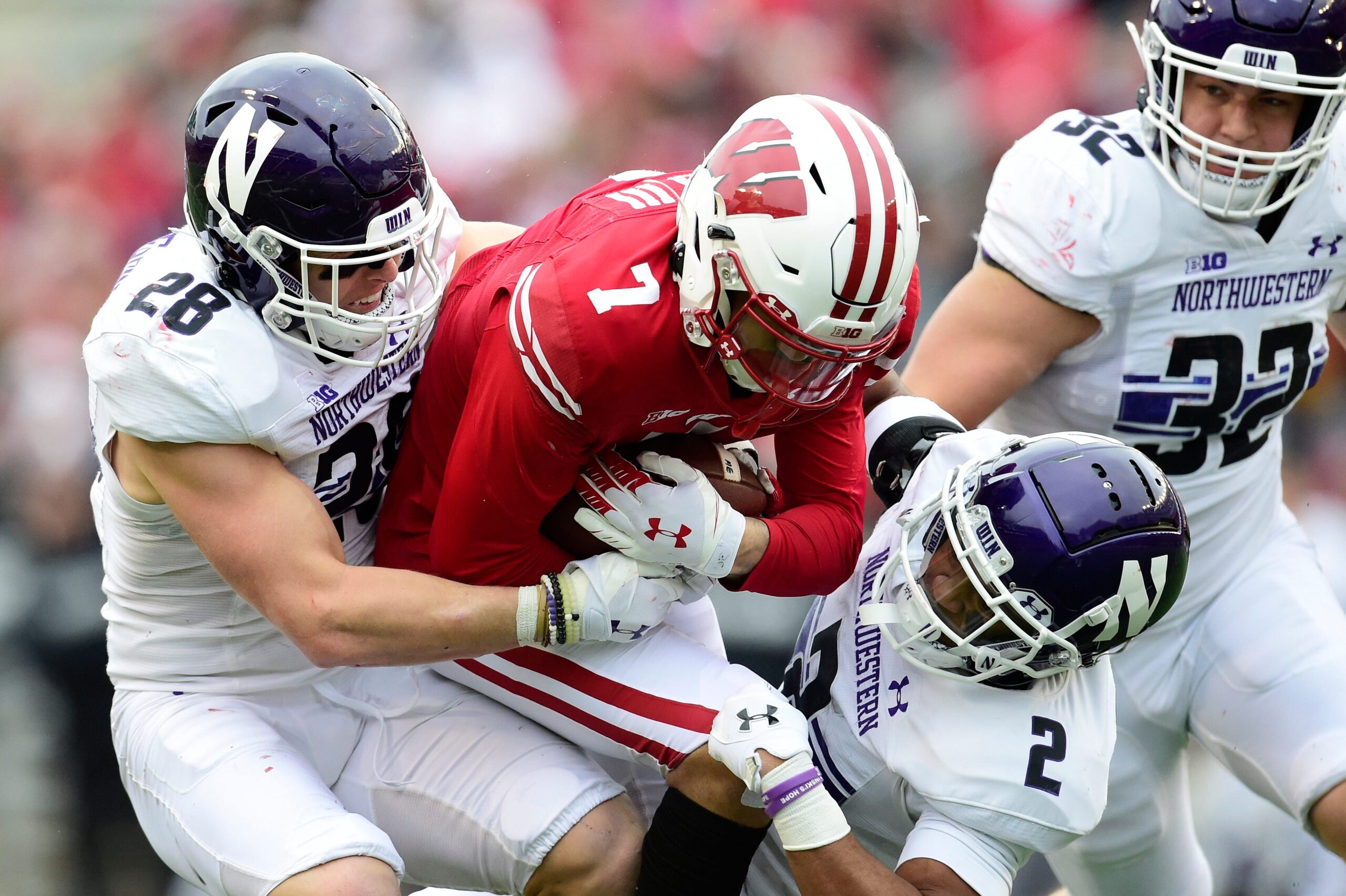 What Is A Cut Block In Football?

Basically, chop blocks and cut blocks are quite similar. The difference lies in the number of attacking players.

A cut block is a behavior when the offensive player blocks the lower part of the defender. Unlike chop blocks, only one attacker is required to execute the cut block.

Are Cut Blocks Illegal In Football?

Cut blocks are a legal act in American football. The referee will approve as long as there is only one attacker accompanied by a defender and the direction of the block is towards the play.

However, this style of play also carries some risk of injury for the blocked player, so many people still consider it a bad style of play.

Chop blocks are one aspect of cut blocks, the only difference being that there is an extra blocker above the defender. In contrast, cut blocks only consist of an offensive player blocking a defensive player below their waist.

The order of the player’s block doesn’t matter with this strategy. A chop block can start from a legal upper body block or a cut block.

In order not to make a mistake, players need to be careful when blocking and making shielding moves before the opponent. Besides, you also can’t let your teammates get involved as it will lead to an immediate foul.

If you have any questions regarding chop blocks, please find the answers in the section below. 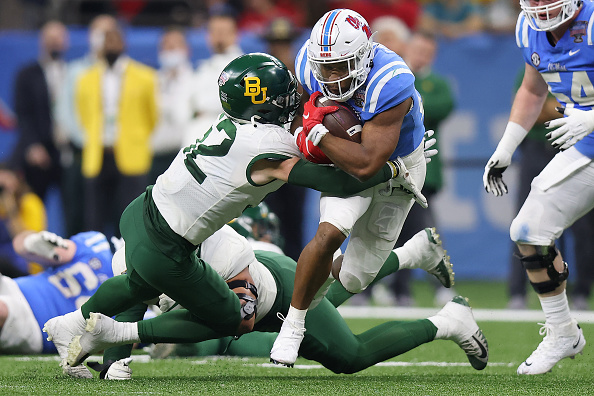 Can You Block Below The Waist In The NFL?

In most situations, the NFL prohibits blocking below the waist. The main reason is that this style of play can cause serious knee injuries for players who are blocked.

The only exception to this rule is cut blocks, as long as the blocking side is in the direction of the play. This tactic is also only allowed when attacking, not defending.

The penalty for blocking below the waist is a 15-yard penalty. Both offensive and defensive formations are breachable.

What Are The Examples Of How Chop Block Is Used In Commentary?

A common example is when players are still standing in the backfield to stop opposing defenders with blitzes. However, if he falls too low and has a block below his waist, it’s a chop block.

When Did Chop Blocks Become Illegal?

Chop blocks have had many improvements and changes to become flexible with the team’s tactics. However, it all became illegal because of the high risk of injury in the run-up to the 2016-17 NFL season.

No. All players are not allowed to perform chop blocks. However, they can do a cut block from the front of a defender’s legs.

The only two attack positions where cut blocks are not allowed are centers and offensive guards.

No. All chop blocking is illegal in all competitions, including youth football.

What is chop blocking in football? A chop block penalty is a situation when two attacking players block an opposing player and block below the waist area.

This aggressive play can help the passer find gaps and run faster. However, it is easy to cause serious injury to the blocked player.

Because of their dangerous nature, chop blocks have become illegal in every rugby league. You should also not test it when playing.

More in Blog
Funny Basketball Nicknames In NBA 2022: Which Nickname Is The Best?
September 30, 2022